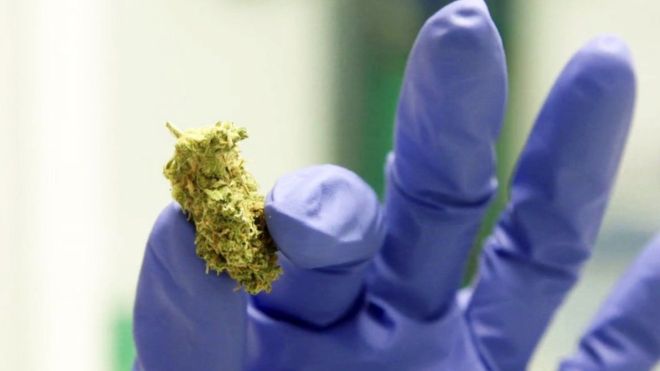 Two cannabis-based medicines, used to treat epilepsy and multiple sclerosis, have been approved for use by the NHS in England.

It follows new guidelines from the drugs advisory body NICE, which looked at products for several conditions.

Charities have welcomed the move, although some campaigners who have been fighting for access to the drugs have said it does not go far enough.

Both medicines were developed in the UK, where they are also grown.

Doctors will be able to prescribe Epidyolex, for children with two types of severe epilepsy – Lennox Gastaut syndrome and Dravet syndrome – which can cause multiple seizures a day.

Clinical trials have shown the oral solution, which contains cannabidiol (CBD), could reduce the number of seizures by up to 40% in some children.

Epidyolex was approved for use in Europe in September, but in draft guidance NICE initially said it was not value for money.

It costs between £5,000 and £10,000 per patient each year – but the manufacturer, GW Pharmaceuticals, has agreed a lower discounted price with the NHS.

It is estimated there are 3,000 people with Dravet and 5,000 with Lennox Gastaut syndrome in England.

The drug does not contain the main psychoactive component of cannabis, THC.

Decisions on drug availability are devolved around the UK, but the NICE guidance should also apply in Wales and Northern Ireland. Scotland may follow suit next year.

The other treatment, Sativex, is a mouth spray that contains a mix of THC and CBD.

It has been approved for treating muscle stiffness and spasms, known as spasticity, in multiple sclerosis. But doctors will not be allowed to prescribe it to treat pain.

It was the first cannabis-based medicine to be licensed in the UK after clinical trials, and has been available on the NHS in Wales since 2014. It costs around £2,000 a year per patient.

Back then, regulators in England said it was not cost effective, but now that decision has been reversed. It should also be available in Northern Ireland.

What has been the reaction?

“Dravet and Lennox Gastaut syndromes are both complex difficult epilepsies with limited effective treatment options and this gives patients another option… that could make a difference to care,” she said.

Galia Wilson, chairwoman of Dravet Syndrome UK, said: “Many families come to us asking about the potential of cannabis-based medicines, particularly cannabidiol, and we are thrilled that one is now available on the NHS.”

But not everyone is happy. Many parents of children with epilepsy are paying thousands of pounds a month for medicines imported from Europe and Canada that contain both THC and CBD.

They have reported dramatic reductions in the number and severity of seizures in their children, and are furious that NICE has not approved any cannabis-based medicines for childhood epilepsy that contain both components.

The campaign group, End Our Pain, said the new guidelines were a “massive missed opportunity”.

Spokeswoman Millie Hinton said: “This restrictive guidance is condemning many patients to having to pay for life-transforming medicine privately, to go without or to consider accessing illegal and unregulated sources.”

How did we get to this point?

The law was changed in November 2018 to allow specialist doctors to prescribe cannabis medicines, but this has happened in only a handful of cases.

Most doctors have been unwilling to write prescriptions for medicines because, unlike Epidyolex and Sativex, they have not been through randomised controlled trials.

Genevieve Edwards, from the MS Society, said they had been campaigning for access to Sativex for years and “it was brilliant NICE has finally listened”.

However, she said the guidelines did not go far enough because no cannabis-based treatments had been recommended to treat pain – a common symptom of MS.

She also added that even more people could miss out “because Sativex would be funded by local bodies – who might not have the resource they need to prescribe it”.

Ley Sander, medical director at Epilepsy Society and professor of neurology at UCL, said: “The need for new treatment options is unquestionable and it is reassuring that the new medication has been through clinical trials and regulatory processes. But the time frame for these means we still cannot be certain of the long-term efficacy of this CBD product or what its effect might be on the developing brain. It is important to remember that this is not a magic bullet. Like other anti-seizure medications, it is likely to work for some but not for others.”